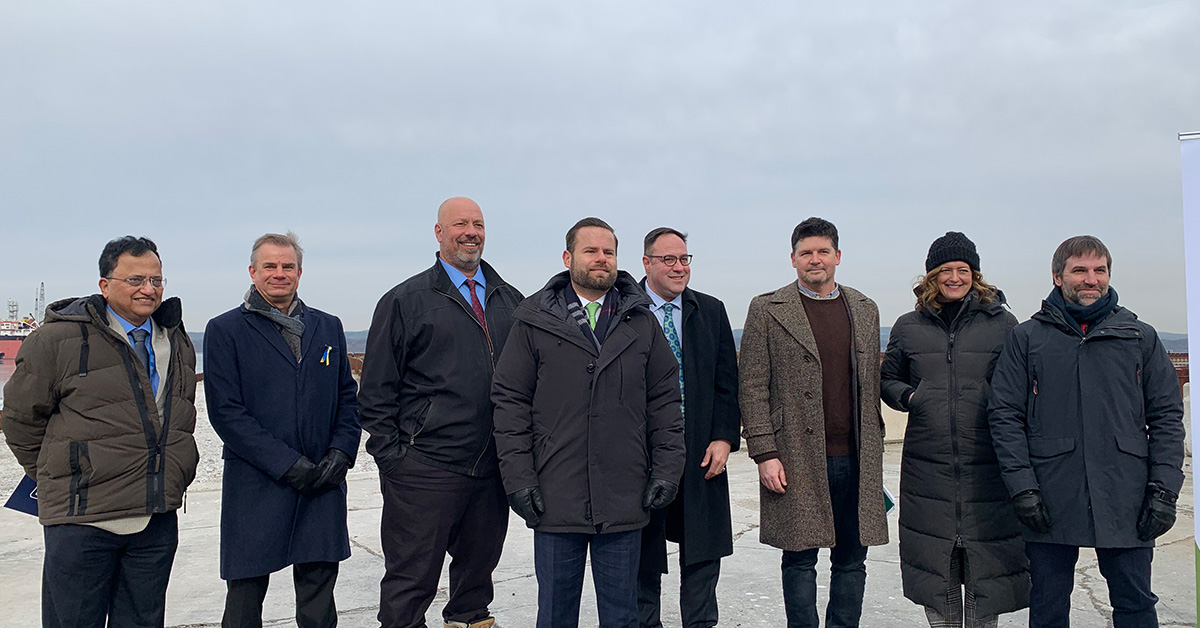 A cleaner Hamilton Harbour: all contaminated sediment removed or capped at Randle Reef

From: Environment and Climate Change Canada

Randle Reef partners highlight the completion of stage 2 of the Contaminated Sediment Remediation project, removing over a century of contamination from Hamilton Harbour.

The Great Lakes are essential to the health and well-being of Canadians, ecosystems, and the economy.

Today, the Minister of Environment and Climate Change, the Honourable Steven Guilbeault, along with the Minister of Public Services and Procurement, the Honourable Filomena Tassi, the Ontario Minister of the Environment, Conservation and Parks, the Honourable David Piccini, the Mayor of Hamilton, his worship Fred Eisenberger, and the Mayor of Burlington, her worship Marianne Meed Ward, announced the successful completion of stage 2 of the Randle Reef Remediation Project. This is a significant step to remove toxic substances and restore water quality and ecosystem health in the Hamilton Harbour Area of Concern.

During Stage 2, over 615,000 cubic metres of contaminated sediment was managed, enough to fill a hockey rink nearly three times over. The sediment was primarily dredged and placed into an Engineered Containment Facility (ECF) constructed during the first stage, while remaining contaminated sediment was capped in-place. As part of the third and final stage of the project, scheduled to begin in fall 2022 and complete by 2024, a multi-layered environmental top will be placed on the ECF as a final step to isolate contaminants. Once complete, the area will provide valuable new port land that will be managed by the Hamilton-Oshawa Port Authority, contributing to economic growth for the community.

The Randle Reef Remediation Project is a joint initiative involving the Government of Canada, the Province of Ontario, the City of Hamilton, Halton Region, the City of Burlington, Hamilton-Oshawa Port Authority and Stelco. The $138.9-million clean-up is funded through a public-private approach, with the federal government and the Province of Ontario each contributing a third of the funding and the remaining third collectively funded by local partners. The multi-year remediation plan, led by Environment and Climate Change Canada, focuses on removing and containing toxic sediment in the Reef area of the harbour, a legacy of the intense industrial and urban development around its shores dating back to the 1800s.

The Government of Canada and the Province of Ontario collaborate and coordinate efforts to restore, protect and conserve the Great Lakes through the Canada–Ontario Agreement on Great Lakes Water Quality and Ecosystem Health (COA). Canada and Ontario have committed to completing all remedial actions in six Great Lakes Areas of Concern by 2026. The Government of Canada is also implementing a strengthened Freshwater Action Plan with a historic investment to protect and restore large lakes and river systems, starting with the Great Lakes-St. Lawrence River System.

“Today marks the completion of a major step in the cleanup of Randle Reef, with enough contaminated sediments removed and contained to fill a hockey arena three times. Local residents will be happy to know that we are cleaning up the local harbour from the long legacy of industrial activity through a model of collaboration between many partners. Our Government will continue to invest in the protection and restoration of the Great Lakes and freshwater ecosystems across Canada.”
– The Honourable Steven Guilbeault, Minister of Environment and Climate Change

“Our government is committed to making the investments needed to protect the environment and improve the quality of life of Canadians. With this milestone in the Randle Reef Remediation Project, Hamilton Harbour is now a cleaner and safer place for people and wildlife, and will provide new opportunities for socio-economic development in the community.”
– The Honourable Filomena Tassi, Minister of the Public Services and Procurement

“I am thrilled that Stage 2 of the Randle Reef Remediation Project has been completed. This signifies real progress that the Government of Canada and our project partners are making in restoring this shared resource for the communities of Burlington and Hamilton. We remain committed to protecting our environment and restoring our waterfront for generations to come.”
– The Honourable Karina Gould, Minister of Families, Children, and Social Development

“As someone who has reported on and followed the cleanup of Randle Reef with great interest, I know how important this remediation is to the people of Hamilton, Burlington and beyond. I am thrilled to witness the completion of the dredging part of this process and look forward to a full environmental recovery of this area. This project is so important for the health of our waters, our communities and our economy.”
– Lisa Hepfner, Member of Parliament for Hamilton Mountain

“The completion of this stage of the Randle Reef project gets the communities of Hamilton and Burlington one step closer to delisting Hamilton Harbour as an ‘Area of Concern’. Additional investments from all levels of government are required to improve water quality with the ultimate goal of enhanced fish and wildlife habitat; complementing past investments we’ve made in our waterfront trails and recreation areas.”
– Chad Collins, Member of Parliament for Hamilton East-Stoney Creek

“Ontario is committed to keeping our lakes and waterways clean and protected. Our support for the Randle Reef Project is integral to our efforts to create the prosperous and healthy future we all want to see for our province, with the Great Lakes continuing to serve as one of the foundations for the unparalleled quality of life we enjoy in Ontario. It’s a great legacy we can leave to future generations.”
– The Honourable David Piccini, Minister of the Environment, Conservation, and Parks, Province of Ontario

“Collecting and containing the contaminated sediment is a key step in the remediation of Randle Reef and an incredibly important part of our efforts to transform Hamilton Harbour into a healthy ecosystem and a viable waterfront for all to enjoy. The City of Hamilton is proud to be one of seven funding partners participating in this vital project under the tremendous leadership of our federal and provincial governments. We also thank our municipal partners and Stelco for their collaborative efforts to get Randle Reef cleaned up.”
– Mayor Fred Eisenberger, City of Hamilton

“Halton Region is committed to protecting the natural environment and our shoreline. Through the Randle Reef Project, we can further enhance water quality in Lake Ontario and ensure our community can enjoy access to this important resource and landmark for years to come.”
– Gary Carr, Halton Regional Chair

“The health of our waterways is vital to us all and extends beyond municipal borders. We are proud to do our part at the City of Burlington as a funding partner in the Randle Reef Contaminated Sediment Remediation Project. We are all looking forward to this next stage and ultimately the delisting of Hamilton Harbour as a Great Lakes Area of Concern.”
– Mayor Marianne Meed Ward, City of Burlington

“We’re pleased to celebrate this important milestone with Environment and Climate Change Canada and all of the project partners. The Randle Reef Sediment Remediation Project is a transformational step in improving the health and water quality of Lake Ontario, and the image of Hamilton itself. As we enter the third and final phase, HOPA looks forward to a new chapter in the history of Hamilton Harbour, and transitioning this site into a productive port facility.”
– Ian Hamilton, President & CEO of the Hamilton–Oshawa Port Authority (HOPA Ports)

“The long-term health and sustainability of Hamilton Harbour is extremely important to Stelco and we are exceptionally proud of our contributions to ensure the success of the Randle Reef Remediation Project. On behalf of our employees and the entire community, I would like to thank all the partners participating in this project for their dedication and commitment to our local environment.”
– Sujit Sanyal, Chief Operating Officer, Stelco