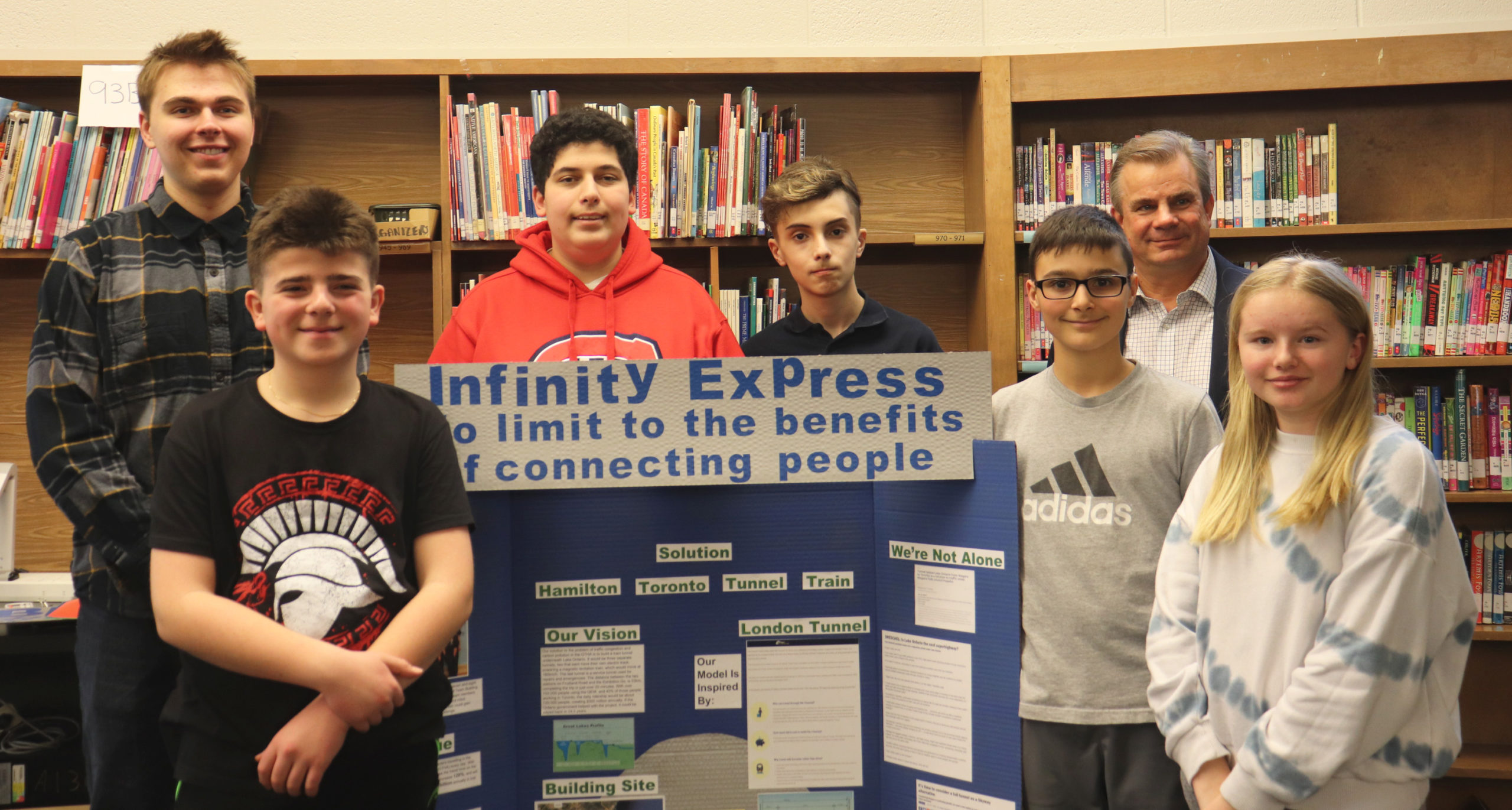 Hamilton, ON– A team of six 7th and 8th graders at Stoney Creek’s St. Martin of Tours Christian Elementary School are bringing an ambitious project idea to the First Lego League (FLL)  Ontario West Provincial Championship in Waterloo this weekend.

The team is preparing to present their idea for a direct, underwater passenger train connection called the Infinity Express HTTT (Hamilton-Toronto Train Tunnel) against hundreds of other teams from across the province on Saturday. Though it would take a few years to build, a one-way ticket on the HTTT would cost approximately $10 and the trip would take about 20 minutes.

Their idea for the Infinity Express HTTT is inspired by underwater, high-speed European trains like the Eurostar which provides direct service from London, England to Paris, France. While researching the idea, the students came across a local Spec article featuring HOPA Ports CEO, Ian Hamilton, talking about the feasibility of a similar hyperloop connection. With the encouragement of their mentor Aaron Shannon (a senior at Bishop Ryan Catholic Secondary School), they decided to reach out to Ian for some advice and feedback on their idea ahead of the competition. He agreed.

During a presentation to the CEO in the elementary school’s library on Monday, team members Matteo and Noah were quick to demonstrate why this connection would be valuable for all kinds of commuters, and how it would connect into other transportation systems already in place across the region. “We would want the Infinity Express to run on an autonomous, driverless system so that people could focus on customer service and wayfinding, to provide one of the best train-travelling experiences in the world.”

In hearing the project concept, Ian Hamilton was struck by the train’s efficiency and potential environmental impact. “You should double the price for what you’re offering, and include some more detail about the reduction of greenhouse gases that would be eliminated by people not traveling back and forth by car,” advised Hamilton. He also recommended that the tunnel be used for transmitting urgent packages and cargo in off-peak hours, and how the port’s marine assets and Hamilton’s airport could also connect into the system.

FLL is a STEM program that engages students in science, technology, engineering and mathematics. The St. Martin of Tours’ team is one of four to make it past the qualifying round in Hamilton Catholic District School Board earlier this month by earning the highest average of points through the four sections of the project: presentation, core values, design and robot game.

About the reception of new and creative ideas in the transportation industry, Ian had some valuable advice to its next generation of big thinkers: “They’ll tell you why it won’t work but keep going and don’t lose faith.”