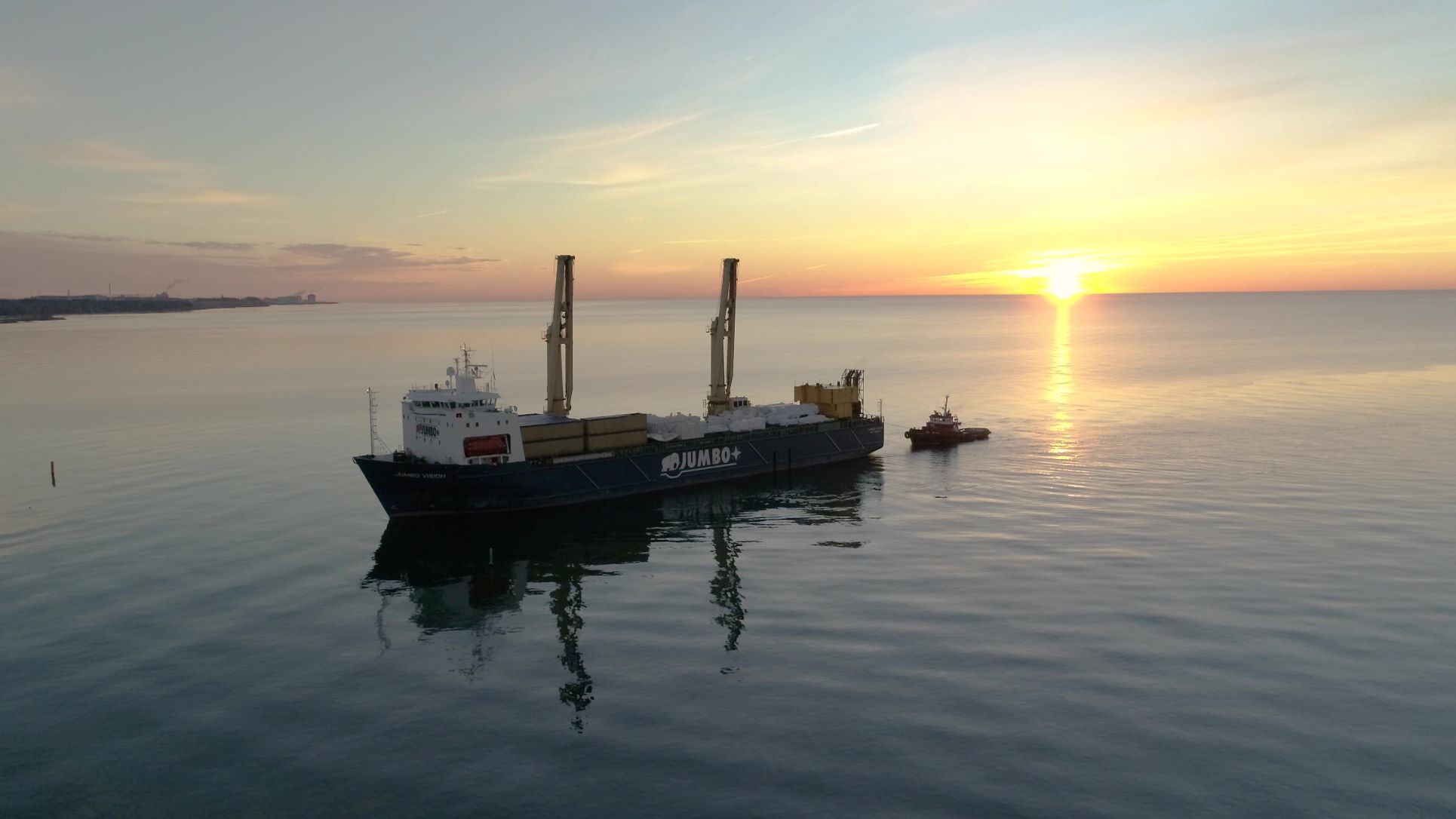 OSHAWA, ON – A trio of tunnel boring machines (TBMs) has arrived in the Greater Golden Horseshoe, destined for Metrolinx’s Eglinton Crosstown West Extension and Scarborough Subway Extension projects. Following a two-week journey across the Atlantic, the boring machines, one 12 metres in diameter and the other two both 6.5 metres in diameter, arrived at the Hamilton-Oshawa Port Authority’s (HOPA Ports) Ontario ports. All manufactured by Herrenknecht in Germany, the larger Scarborough Subway Extension TBM was delivered to the Port of Oshawa, and the other two for the Eglinton Crosstown West Extension project were delivered to the Port of Hamilton.

Scarborough’s TBM, weighing in at 2,000 tonnes, will help build the largest subway tunnel in Toronto’s transit history. The TBMs are so large, they have to be loaded into vessels in pieces for assembly at their final destinations.

As bookends to the Greater Golden Horseshoe, Oshawa and Hamilton’s ports are key gateways to the most densely populated area of Southern Ontario and the country’s busiest construction zone. “As an integrated port network, we look to create better connections for businesses and industrial users moving cargo throughout the Greater Golden Horseshoe, just like Metrolinx does for rail passengers,” said Ian Hamilton, President & CEO of HOPA Ports. “We’re thrilled to see goods move through the Ports of Hamilton and Oshawa, which will in turn help people move more efficiently.”

At each port, carrier vessels delivered the heavy cargo with the assistance of the expert stevedoring teams who serve HOPA’s network of ports.

The Scarborough TBM arrived at the Port of Oshawa aboard the heavy load carrier Jumbo Vision, where over the course of an entire week longshoremen will discharge the vessel and the TBM piece by piece. That is where the port’s stevedore, QSL, and its expertise comes in. “QSL is a provider of tailor-made solutions for all cargo types,” said QSL Senior Sales Representative, Kevin Paradis-Rioux. “This particular job has taken over a year to coordinate from start to finish. The discharge of the TBM is an example of the customized solutions we can provide for heavy equipment manufacturers.”

Come spring, the Scarborough TBM will begin burrowing a single 7.8km-long tunnel – from Sheppard and McCowan to Kennedy Station – clearing an underground pathway for the three-stop Scarborough Subway Extension. Due for completion in 2030, the project will make it even more convenient and comfortable for Scarborough residents to travel back and forth to the downtown core.

The twin TBM cutter heads bound for the Eglinton Crosstown West project came through the port of Hamilton aboard the Federal Delta, handled by stevedore Federal Marine Terminals. “FMT is pleased to be a part of this exciting project for the region. We value our long-term partnership with HOPA by playing an essential role in the economic success of the Port and region. Handling the TBMs from a Fednav vessel illustrates our complete, integrated service offering, providing reliability and value to our customers.” said Matthew McPhail, Vice President, Sales and Marketing, FMT.

The Eglinton Crosstown West Extension, expected to be complete in 2030-2031, will extend the Eglinton Crosstown LRT another 9.2 kilometres farther west through Etobicoke and into Mississauga. The TBMs arriving through the Port of Hamilton will tunnel the section between Renforth Drive and Scarlett Road.

Metrolinx is holding a naming contest for the three boring machines, and you can vote for your favourites here: https://blog.metrolinx.com/2021/12/01/short-list-of-names-released-in-toronto-subway-tunnel-boring-machines-contest/

“Projects like the Eglinton Crosstown West Extension and the Scarborough Subway Extension will not only benefit the communities where they are being built, but the region as a whole,” said Phil Verster, Metrolinx President and CEO. “We’re happy to see these incredible machines arrive through local ports in Hamilton and Oshawa as part of their journeys to their respective launch sites.”

About QSL
QSL is a key supply chain player in port terminal operations, stevedoring, marine services, logistics and transport throughout North America. We treat cargo with care, listen closely to our clients and are committed to making a difference in the communities where we operate.

Metrolinx is undertaking the largest transportation investment in Ontario’s history to get you where you need to go better, faster, easier, while also operating GO Transit, UP Express and PRESTO. We have a unique opportunity to plan, build, operate and connect transportation in the Greater Golden Horseshoe. To learn more about what Metrolinx is building and operating, visit metrolinx.com.

Fednav is a privately-owned shipping company and is the largest international dry-bulk shipping group in Canada. It operates a most modern fleet of about 120 bulk carriers trading worldwide, of which 60 are owned. FMT has been a leader in the stevedoring and terminal handling industry for nearly six decades. Its extensive experience has naturally resulted in a robust network of connections in all sectors of the industry. Today, FMT operates in multiple marine terminals across North America.

Position Overview: This key project management role will be responsible for the implementation of capital and major maintenance construction projects at the Port of Oshawa.