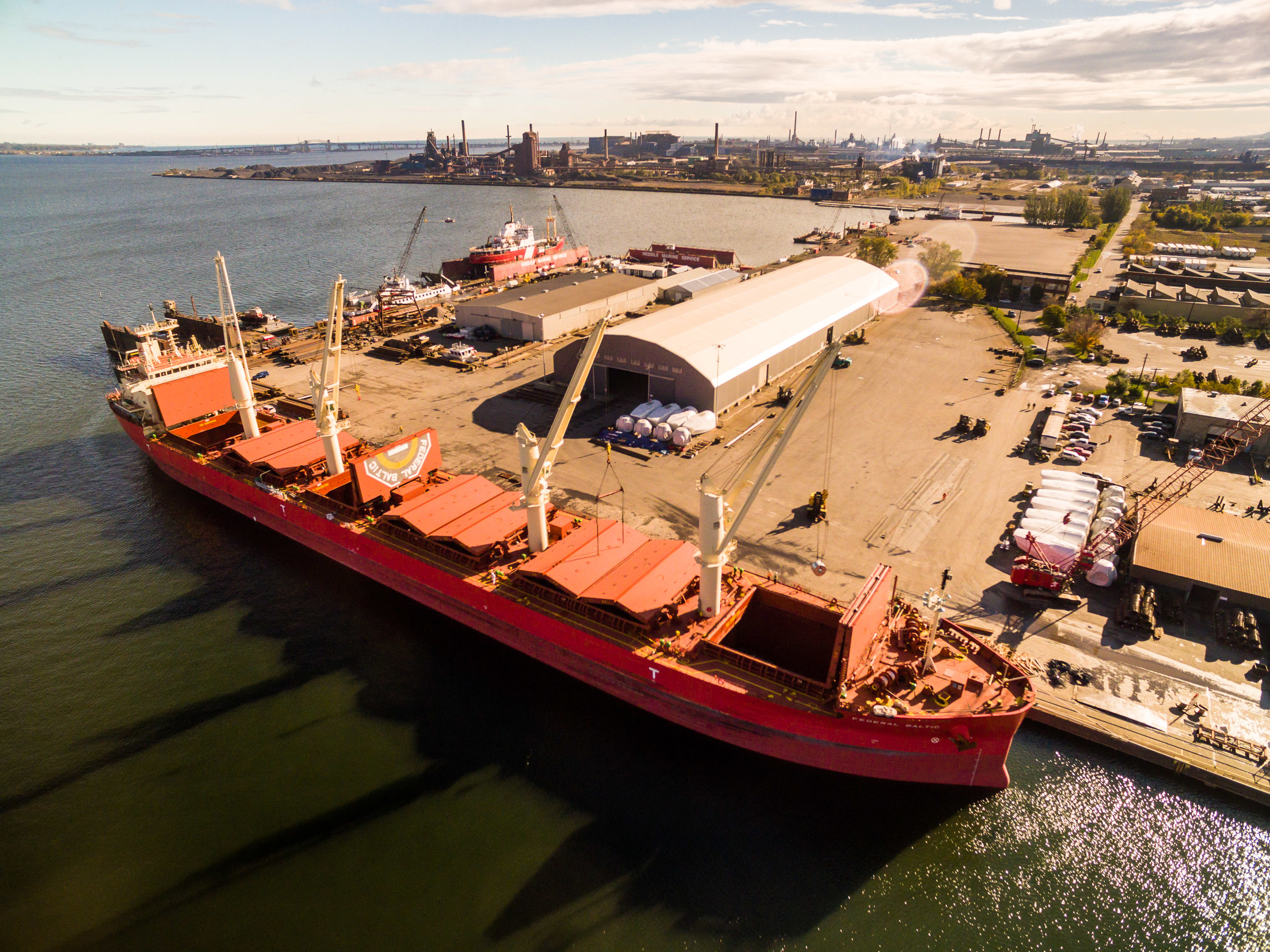 When the Seaway opened in 1959, it marked the completion of one of North America’s greatest infrastructure projects: a marine highway connecting Great Lakes cities to the Atlantic. “It has moved the ocean a thousand miles inland,” declared the Globe and Mail newspaper of the day. It was an enormous and ambitious infrastructure project, costing $470 million (approximately $4 billion in today’s dollars) that reflected the optimism of the time.

The creation of this trade corridor opened the heartland of North America to global markets, and set the stage for an unprecedented era of growth. The prosperity it delivered helped shape cities like Chicago, Detroit, Toronto and Hamilton. It served as the key supply route for our most important industries, including steel, automotive and other manufacturing, as well as agri-food. In the six decades that followed, the Great Lakes economies have changed and evolved, driven by innovation and technology, population growth, and globalization.

At this point, 60 years on, we need to ask ourselves, ‘are we still using this trade corridor to its full potential? And what should we be doing to position our Great Lakes corridor to serve the economies of today and tomorrow?’

If we want to continue to compete and serve industry effectively, we need to get a handle on the costs of shipping via the Seaway. There isn’t one single factor to blame, but the sum effect of dozens of small inefficiencies is a transportation option that doesn’t compete as well as it could. A recent report commissioned by the Council of the Great Lakes Region (CGLR) concurs:

“To shift freight to the maritime mode in the Region necessitates a clear commercial value proposition … Currently, there are many interests, regulations and inefficiencies that impose costs on the maritime system, hindering its cost competitiveness. The high cost of pilotage, high port terminal handling costs, and cabotage regulations that restrict competition, are among the factors that drive up the cost of maritime transportation.” – CGLR/CPCS 2017

Technology is helping to moderate costs, with innovations like handsfree mooring in Seaway locks, new navigation tools to aid in pilotage, and a revitalized, more fuel efficient Great Lakes Fleet. But there’s much more to be done, and a gathering urgency. As the CGLR paper notes, “there is significant frustration with the slow pace of progress in addressing the drivers of high maritime transportation costs.”

Marine transportation can be a problem-solver

There is sometimes a resistance to influence goods movement flows via one mode over another. But we are facing a congestion crisis on our highways, especially in southern Ontario, and that kind of hands-off approach may no longer be an option. Instead, we should be actively promoting the use of marine transportation for goods movement within the Great Lakes region, looking at all the available options, including roll-on/roll-off services, and the expanded use of barges within the Lakes. Policymakers need to consider all the benefits of a more progressive modal balance, including reduced truck traffic and demands on expensive surface transportation infrastructure, reduced CO2 and other pollutants, and more competitive options for cargo shippers.

Great Lakes as a trade gateway

Today as we look forward, it is helpful to look back at that early recognition of the Great Lakes as one of the continent’s great trade gateways. Excellent work is underway to ensure Canada’s coastal gateways can compete globally; yet the Great Lakes function somewhat differently, in that a greater proportion of the cargo transiting is used or processed right at the destination. And so to optimize this infrastructure for Canadian industry, as the CGLR study recommends, we must identify “long-term strategic transportation/utility corridors and industrial lands in the Great Lakes and St. Lawrence region and develop a plan to preserve and protect these for future development.” The province of Quebec is already taking important steps in this direction, establishing industrial port zones: transportation-efficient hubs where industry can invest, grow, and create prosperity.

As growth becomes increasingly constrained at Canada’s major ports, there is also an opportunity to make better use of smaller marine assets throughout the Great Lakes basin, bringing them into a cooperative network of marine infrastructure that supports the wider regional economy. This approach would have the benefit of allowing more, often smaller communities to better leverage the economic development power of marine transportation infrastructure.

Sixty years after its opening, the Seaway remains an engineering marvel. The barriers to its potential today are less about the region’s physical geography, and more about entrenched interests and policies. These will require no less hard work and cooperation to overcome. Step by step, we can ensure the system continues to live up to its potential, as a regional economic driver for today and tomorrow, delivering lower costs, better environmental performance, reduced congestion and improved safety.

Do you love working by the water? Do you strive for excellence in customer service? Are you a team player, excited to work in a