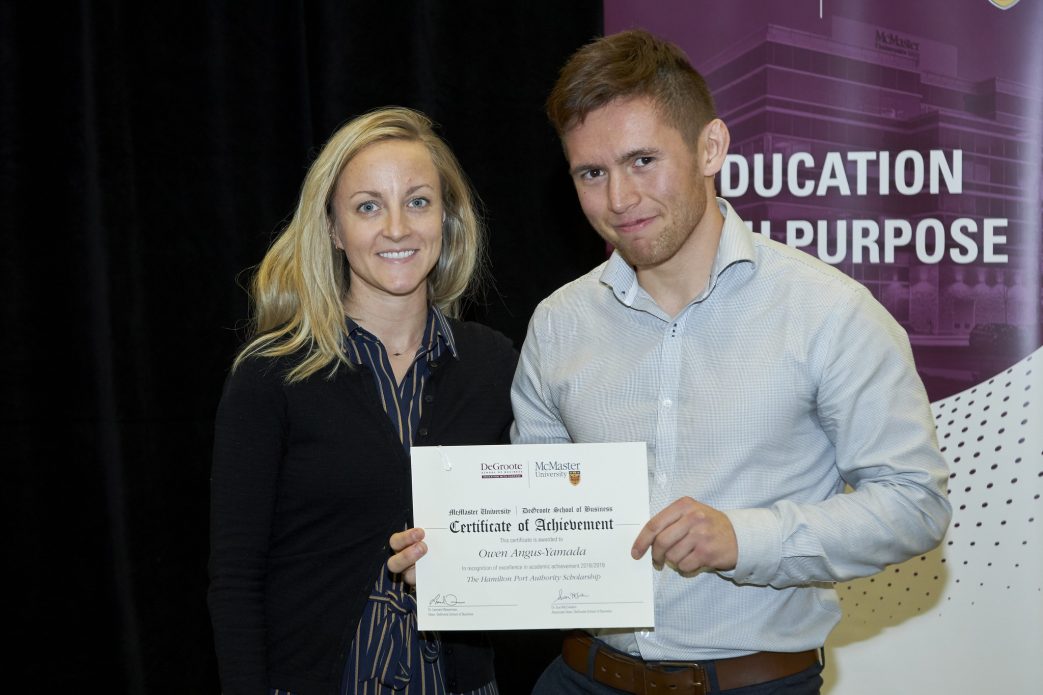 Hamilton, ON – Please join us in congratulating this year’s Hamilton Oshawa Port Authority scholarship recipient at McMaster University, Owen Angus-Yamada. Now in his fourth and final year, Owen is finishing his Bachelor of Commerce degree at McMaster’s DeGroote School of Business.

HOPA Ports was proud to attend the DeGroote School of Business Undergraduate Awards Recognition Reception last week and award Owen in person. Owen was selected based on his stellar academic performance and level of community involvement. A Hamilton native, Owen regularly volunteers at the Canadian Japanese Cultural Centre, The Good Shepherd and Living Rock Ministries.

He was pleasantly surprised when he was notified by the university that he was the recipient of the HOPA scholarship. “I was surprised when I saw Hamilton Oshawa Port Authority, but I know that Hamilton has the largest port in Ontario so there is great economic and logistic importance placed onto the organization. Aside from that, my mom also lives in the North End of Hamilton, so we’re close to the Port Authority.”

Over the past few years Owen has enjoyed many of his business courses and electives including microeconomics and behavioural psychology. One of his favourite academic experiences has been getting involved in international presentation competitions, and putting together a pitch under tight deadlines around real-life business case study examples.

What are some of his future aspirations? In addition to travelling once he’s finished his undergrad, Owen “would like to get experience in project management, marketing and business consulting, and maybe someday conduct research in those areas and eventually teach at a university level.”