The campaign, dubbed ‘Operation Safe & Sober’ focuses on tips to stay safe while enjoying the water this boating season. The information is a refresher on safety practices all boaters should know, like wearing a life jacket, and not drinking and boating.

The campaign also addresses an issue that is particularly relevant to Hamilton Harbour: how to safely share the harbour with large commercial cargo ships.

Close to 600 large commercial vessels sail into Hamilton Harbour each year. “Recreational boaters, especially those visiting from elsewhere, may not be used to seeing or navigating around the big ships,” said Hamilton Harbour Master Vicki Gruber. “These vessels are massive and obviously not as maneuverable as small craft. Our message is: stay alert and steer clear.”

The HPS Marine Unit and HPA’s Harbour Master’s Office/Port Patrol will be reaching out directly to recreational boaters on the water and at local marinas throughout the season.

“Our priority is the safety of all users of our waterways.  You can expect to see us actively patrolling and conducting vessel safety inspections in Hamilton Harbour and Western Lake Ontario.  Our goal is to promote and increase boater safety through a combination of education and enforcement,” said Constable Ben Rushton of the HPA Marine Unit. 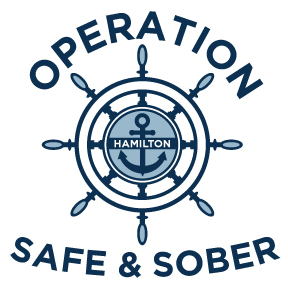