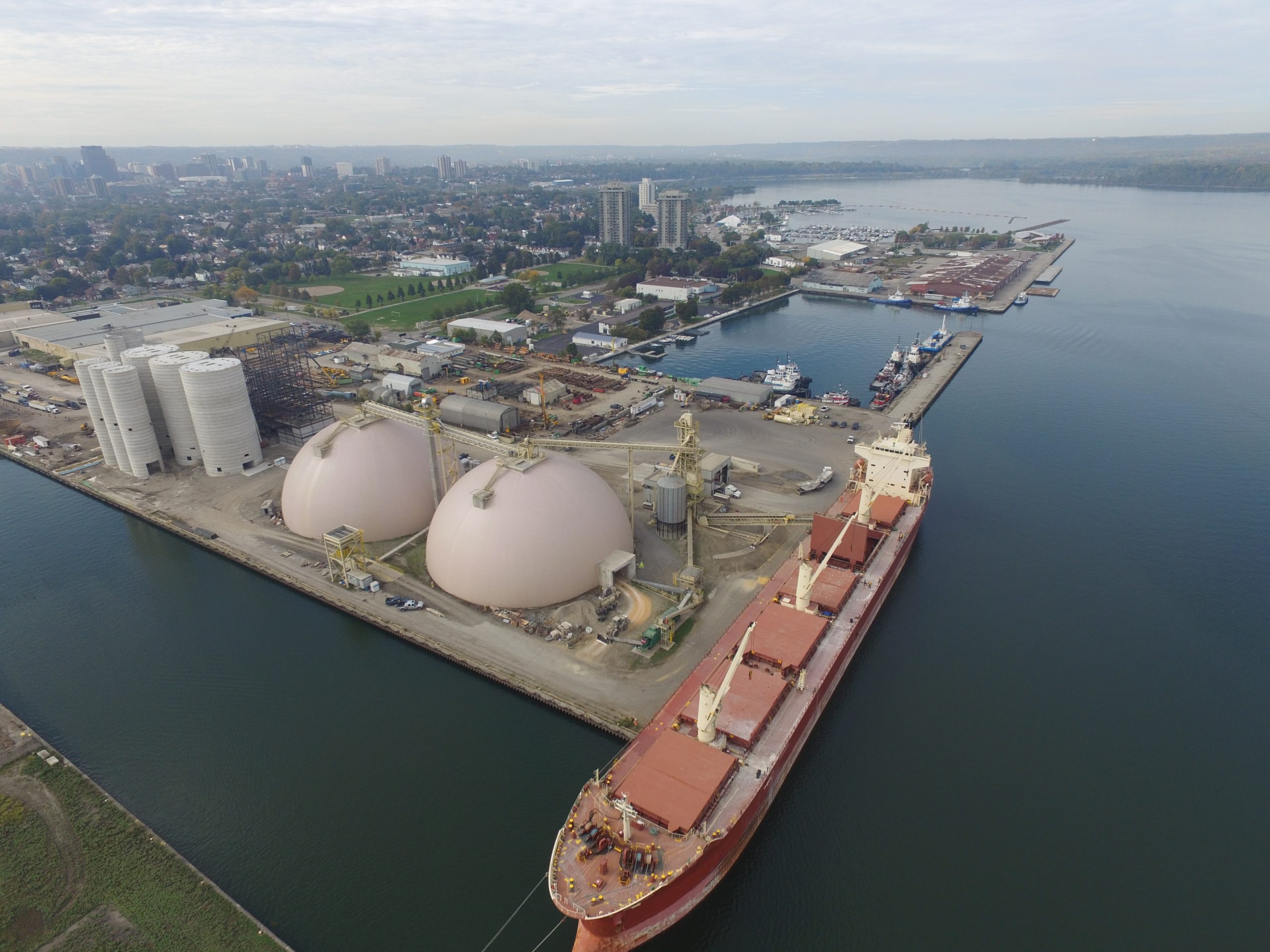 HAMILTON, ON – The Honourable Filomena Tassi, Minister of Seniors and Member of Parliament for Hamilton West-Ancaster-Dundas, announced the Port of Hamilton will receive a $5.5 million investment for a Pier 10 Export Expansion from the National Trade Corridors Fund (NTCF) on behalf of Transport Canada. The federal funding contributes to a $16 million overall expansion project managed by the Hamilton-Oshawa Port Authority (HOPA).

This investment will facilitate Pier 10 becoming a dedicated agri-food cluster on the port lands, creating more efficient marine infrastructure to support trade flow and building on several capital investments made by the Port Authority and its food-sector tenants over the past decade.

The Pier 10 Export Expansion will involve the relocation of Soletanche Bachy Canada, formerly Bermingham Foundations (a pile driving manufacturer) off of the pier to make room for agri-food expansion on site, and two distinct construction projects. The first construction project will be rebuilding Pier 10’s east dock wall (which was originally constructed in the early 1900s) and dredging the Wellington slip alongside it to accommodate berthing seaway vessels. The second project will be the construction of a covered storage facility to house raw sugar, grains and other dry bulk products, reducing truck trips from offsite locations. Moving Soletanche Bachy’s operation to elsewhere on the Port will also reduce the noise levels (involved in the pile-driving manufacturing process) for nearby residents in the North End.

Canadian grain company, Parrish & Heimbecker’s current expansion of its Hamilton milling facility (phase I operations began in 2017) will make P&H the single largest user of Ontario wheat. Theirs was the first flour mill built in Ontario in over 75 years. As one of the busiest exporters on the Port, the new marine infrastructure and berthage space will decrease vessel wait time (which are costly to ship operators), and make it easier for P&H to move more grain by ship.

Sucro Sourcing recently completed a granular sugar refinery and crystallization tower, adding to the liquid sugar refinery which has been in place since 2014, marking the first successful sugar production facility built in Canada since 1958, and providing a welcome competitor in the Canadian refined sugar market. Moving sugar unloading and storage to Pier 10 will also enable Sucro Sourcing to keep more product at their facility, taking thousands of trucks off of the road and reducing truck traffic on nearby residential streets.

Continued investment in agri-food operations at the Port of Hamilton has supported a growing regional food processing supply chain network. The Port of Hamilton is the largest port in Ontario and the primary marine gateway to the Greater Toronto-Hamilton Area (GTHA), the country’s most populous region. The agri-food sector is a $1 billion industry in Hamilton, and in 2018 the Port of Hamilton saw a 63% increase in international exports. The Pier 10 Export Expansion will enable further grain handling capacity, increased domestic processing of raw sugar (for re-export in turn), and improved goods fluidity.

With 630 acres of land and 130 tenants, the Port of Hamilton is critical infrastructure for key Ontario industries, facilitating international trade flows and supporting domestic supply chains. Now merged with the Port of Oshawa, HOPA will continue to deliver on its mandate to support Canadian prosperity and trade by ensuring Canadian industry has the space to invest and grow.

About the Pier 10 Export Expansion Plan

With the support of the NTCF, HOPA will expand the export potential for current and future agri-food businesses at the Port of Hamilton on Pier 10. This plan includes two key construction elements:

Ian Hamilton, President & CEO, Hamilton Port Authority
“The infrastructure investments we have made to support agri-food businesses on the port lands continue to drive new opportunities for export and economic growth,” said HOPA President & CEO Ian Hamilton. “We’re proud to help our customers increase their onsite capabilities, enhance export capacity, and decrease local truck traffic. This is good news for our port customers, the environment and the surrounding community.”

The Honourable Filomena Tassi M.P., Hamilton West-Ancaster-Dundas, Minister of Seniors
“Our government is investing in Canada’s economy by making improvements to our trade and transportation corridors. We are supporting projects to efficiently move goods to market, to stimulate growth, create quality middle-class jobs, and ensure that Canada’s transportation networks remain competitive and efficient.”

Jonathan Taylor, CEO & Founding Owner of Sucro Sourcing LLC
“At Sucro Sourcing, we are focused on creating value for our customers through continuous innovation and unique supply chain solutions. Our innovative approach to micro sugar refineries, and the proprietary process technology utilized, allows Sucro to reduce costs for our customers and conduct business in a way that is more sustainable and aligned with our customers’ needs. Sucro Sourcing’s Hamilton facility is the first successful sugar production facility built in Canada since 1958, supplying some of the leading multinational food manufacturers in Canada, as part of the southern Ontario food processing supply chain.”

Bruce MacIntyre, President & C.O.O., Parrish & Heimbecker
“Increasing the ability to receive more vessels and expanding our capacity at Pier 10 is the answer to getting more of our grain products to market faster. With this investment, we can continue to grow both our grain export business, and domestic milling business in partnership with Canadian farmers.”